One of the best things I love about a road trip is eating out! Thanks to my parents’ genes, I don’t need to go on a diet even if I’d pig out everyday. 🙂

Last week, we went to Batangas City for an interesting task I am yet to mention. And after dealing with the hot temperature of the city, we got exhausted and hungry. It’s time for a yummy merienda!

The team, together with Ms. Wendy Bautista and Ms. Lea de Chavez of SM Lipa and SM Batangas respectively, went to Letty’s – a local canteen a few meters from the Basilica. Upon entering the canteen, we were greeted by a punching aroma (oops) which we later realized it’s coming from the famous delicacy we’re about to eat. 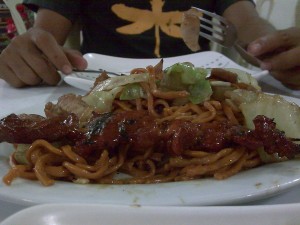 We were told about the pancit tikyano – the only red (or orange) stir-fried noodles in Batangas, or maybe even in the country. The pancit tikyano has the usual pancit toppings – shredded cabbage, upo, sayote, onions, and pork. I don’t know if it has other toppings pa (in some other days maybe). I’m not really a pancit person but probably because of my hunger, I have eaten quite a lot than I expected. And oh, you should eat with with their BBQ din! Para mas kumpleto ang foodtrip.

The team stayed for a few more minutes after the meal. Unfortunately, I wasn’t able to ask how to cook the pancit tikyano and how the noodles become red. Anyone who would like to share some pancit tikyano info? 🙂 All we know is that the name was originated from Mang Tikyano, I supposed the man behind the delicacy, the father of Letty who owns the canteen.

JR Cantos is the Publisher of WOWBatangas.com. Some of the articles here on the website have been contributed over the years, so please just email us at help (at) wowbatangas.com if you have any concerns. Salamat!
@wowbatangas
Previous Daddy’s Delight @ Lima Park Hotel- A Poolside BBQ Party
Next Archdiocese of Lipa to Honor Heroes of Election 2010