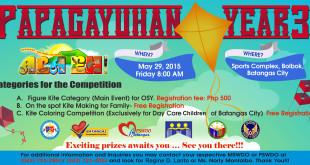 BRGR ST: Dig in to the Batangas Burger Craze 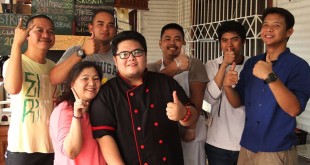 Just this year, burger joints have been popping up here in Batangas and every new store promises of serving delicious burgers that everyone has been craving for. This article is on BRGR ST., a burger joint that will satisfy your cravings and will make you drool in the process. Owned …

We were once again invited to the opening of a Camella Project, this time to Solamente in Batangas City. The launch started with a mass in Brgy. Alangilan, then a motorcade to Brgy. Soro Soro (the site of Camella Solamente) and the rest of Batangas City. Solamente means “one and …

Here are the photos of the Sublian Festival 2014 Grand Parade! Check out our Top 10 Most Celebrated Festivals in Batangas

[imagebrowser id=22] Resorts Wear Competition Date : April 25, 2014 Venue : Hotel Pontefino, Batangas City We were invited by our friends from KIA Batangas to attend the Southern Tagalog leg of Miss Philippines Earth 2014 at Batangas City. Four of the hopefuls are from Batangas, namely Diane Querrer of …

[imagebrowser id=14] Mutya ng Batangas 2013 – Talent Competition Date : December 5, 2013 6PM Venue : Batangas City Convention Centre This coverage is 4 months late, we know, but that’s better than never uploaded. Forgive us fellow Batanguenos! We were just busy with other things. The photos of the …

[imagebrowser id=6] Last night, January 15, we were invited to cover one of the highlights of the annual celebration of Batangas City Fiesta – the coronation night of Bb. Lungsod ng Batangas 2014. On the eve of the city fiesta, a new beauty queen was crowned. Dana Denisse Sabillo is …