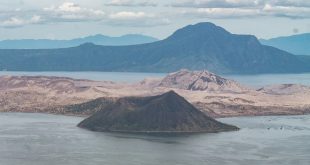 Visit the Talisay, Batangas page for all information on Talisay.

TOPOGRAPHY
The main topographic feature of Batangas Province is the Taal Volcano, which is part of the Western Luzon Volcanic Front that extends northward to Mariveles, Mt. Natib and Mt. Pinatubo. The volcano, which is surrounded by a lake has a crater island in it.

Locally, the rugged and undulating terrain is common on all slopes form the Tagaytay Ridge down to the lake of Talisay. Talisay is suited along the lakefront and its topography is a longitudinal traversing of many minor ridges and drainage basins (valleys).

Local lithology is the result of various eruptions of Taal Volcano. The oldest rock is a Pliocene to recent solidified lava of basaltic to andesitic composition and pyroclastic rocks that are composed of blocks or fragment of volcano rocks embedded in volcanic ash or fine ejecta.

Pleistocene sedimentary rocks overlie the volcanic rock and are composed of tuff ( lithified volcanic ash ) and mixture of pumice and cinders.

The youngest rock formation is the recent alluvium which consist of unconsolidated gravel, sand, silt and clay in varying proportion deposited in rivers and their tributaries as well in the low-lying lakeshore.

SOIL TYPE
There are generally two types of soil area. The TAAL LOAM found along the lakeshore areas and the TAGAYTAY LOAM in the steeper terrain’s. They are generally characterized as having considerable amount of VOLCANIC EJECTA.

CLIMATE
The municipality in general has two distinct seasons, wet and dry seasons. Wet or rainy season usually occurs during the months of May until November, whereas, it is hot or dry season the rest of the year, with the months of March, April as the hottest period. December to February are considered as the coldest period, and temperature during this cool period averaged about 25 °C – 28°C. Hottest months usually register an average of about 33°C – 35°C.

Occasional heavy rainfall episodes occur in the area due to localized thunderstorm activities since the area is relatively near Mt. Makiling.

a)  The most common species which were found along river banks and steeps slopes were species belonging to the family of Moraceae such as Tibig (Ficus nota), Hauili ( Ficus septica), and Tangisang Bayawak ( Ficus variegata ) as well as Takip – asin (Mallotus grandifloral) which are always the first one to colonized an open area or the so-called pioneer species and are usually characterized by broad leaves and high tolerance to sunlight.

b)  There were several kaingin areas noted in Paliparan Aya, Most of the areas were abandoned and are now being colonized by cogon.

Based on the NSO Census 2007, Talisay has a total population of  39,120 as of the present year. Majority of income earners are employed outside of the municipality, mostly in Metro Manila. Local residents are almost known to each other, creating a friendly atmosphere almost within the entire municipality. And as the Filipinos are known for hospitality is evident and is still widely being practiced here. There are 7,925 households.

Illiteracy is not generally a threat to this municipality. There are nine (9) public schools for elementary level and one (1) public school and three (3) private school for Secondary level three (3) public school and nine (9) for kinder and pre-elementary school which  provides our not so well-off families to continue their studies through the guidance and assistance of our efficient instructors who are very determined in their field of work.

Tagalog and English are the most commonly used communications languages. Talisay has a very high literacy rate and communication poses no integral problem.

Jeepney has been very common public land transport in the area that is roughly about 800 number. Other means of public transportation are bicycles and tricycles.

The entire  municipality is totally energized and being serviced by Batangas Electric Coop. II  of  which one 100% of the total households are members.

Deep wells and Spring Developments are the primary sources of water supply. Several barangays are now in Level III (House to House connections). The Level II (Communal Water Distribution System) in Poblacion will soon be activated. Pressure pumps are common among Poblacion households and other parts of low-lying barangays.

In Talisay, specific gravity of wells ranges from 0.16 to 2.06  liters per second per meter of draw down (lps/m).

These water requirements will be obtained from tube-wells that will be installed by the proponent.

The surface water belongs to Class B category as the waters can be used for recreational purposes. It is intended for primary contact recreation such as bathing, swimming, skin diving, etc.

Sewage is not discharged into rivers since houses are provided with individual septic tank. The river is primary used for bathing and laundry purposes.

The most common fish species observed are tilapia fingerlings.

Taal Lake is the third largest lake in the country following.

Laguna and Lanao Lake. It is more than 27 kilometers long north to south and about 20 kilometers wide east to west. It circumference approximately 120 kilometers and has varying depth from shallow waters to about 200 meters deep.

The pH value of the lake is from neutral to slightly alkaline having a pH of 7.4 to 8.9. It was classified as Class “B” by the National Pollution Control Commission (NPCC) that can be used for bathing and fishing. It was also observed that the lake is used for recreational purposes such as jet skiing, swimming, water skiing, etc.

Taal lake is also known to be the only source of freshwater sardine in the Philippines known as Tawilis. This kind of fish species accounts 78% of the total annual fish catch therefore  it is being targeted by major group of fisherman.

Thunderstorms are localized weather disturbance which are quite common in Tagaytay and Batangas due to topography and proximity to bodies of water.

Percentage water vapor amount in the air ranges in monthly values from 69% to 83% with an annual average of 77%.

There are no pollutive industries both rural and urban areas at present. The vehicular traffic in major thoroughfare and the unpaved secondary roads contribute to the concentration of NOx, SOx and air-borne particulate matter.

Plans are afoot to construct a fish landing area force located near the completed multi-million public market project at Poblacion. A temporary boat-docking terminal has been established presently at the Poblacion Shore area.

JR Cantos is the Publisher of WOWBatangas.com. Some of the articles here on the website have been contributed over the years, so please just email us at help (at) wowbatangas.com if you have any concerns. Salamat!
@wowbatangas
Previous Tanauan City, Batangas List of Barangays
Next List of Schools in Sto. Tomas, Batangas