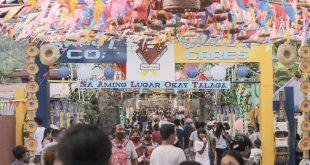 Visit the Rosario, Batangas page for all information on Rosario.

The WOWBatangas team has only covered 3 of the 7 Sinukmani Festivals that are already conducted by the municipality of Rosario.

Rosarians have been celebrating the said festival since 2005 and the team has only managed to experience the 2009, 2010 and 2011 installments.

And with a festival as grandiose as that of the Rosarians which is held every June 9, festival enthusiasts such as the WOWBatangas team may have all the regrets in the world.

Good thing though is that the good people behind rosariobatangas.gov.ph lent us a copy of all sorts of things about the Sinukmani (and its festival) which all Rosarians take pride of. 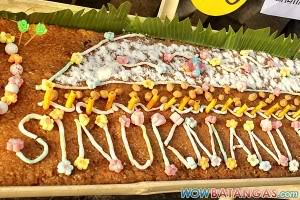 Though I, in behalf of the team could only wish to have experienced and have written what’s below. We have to give credit where credit’s due and we would like to thank, again, the people behind rosariobatangas.gov.ph for being kind in lending us these invaluable pieces of information and for being one in our goal to promote the colorful festivals of our province.

And Long Live the delicacies of Batangas! 

The town of Rosario is one of the oldest towns established in the Province of Batangas. Established in 1687 with the help of by Augustinian friars, the town is strategically located and has access to and from other vital cities and municipalities – Lipa City on the North, Batangas City on the Southwestern and Quezon Province on the East-Southeast.

Blessed with rich soil and vast plains, it is no wonder that agriculture remains as one of the foremost sources of income among local residents. In fact, Rosario is known as the Rice Granary of Batangas, the major local source of rice in the province. It thus comes as no surprise that Rosario has also come to be known for its rice-based delicacies that have also come to be intertwined with local culture.

One such delicacy is the sinukmani – a concoction made of malagkit rice, coconut milk and sugar, much like the biko in appearance but with a variation. The sinukmani is topped with caramelized latik for added flavor.

The sinukmani is not everyday fare for local residents. It is a special delicacy prepared only when there are a number of men around because cooking it requires a lot of muscle – the more cooked the malagkit gets, the heavier it gets as well. It is best eaten as a meryenda, each slice on a piece of banana leaf, and served with a strong cup of kapeng barako. Or it can also be taken as a desert to top a rich meal during fiestas and other festivities.

The Sinukmani is also a favorite fare during Undas or All Saints’ Day when families come together to pray for and reminisce on their loved ones who have passed away.

Such is the sinukmani. As rich and filling as the culture and history of the people of Rosario. As sweet and unique as the smiles that welcome friends and guests to this peaceful town.

HOW THE SINUKMANI FESTIVAL WAS DEVELOPED

The Sinukmani Festival was conceptualized by members of the Foundation Anniversary Celebration Committee headed by Mayor Felipe A. Marquez in 2005. While planning the activities for the 318th Foundation Anniversary of Rosario, the members of the committee deliberated on how to best promote the municipality which is known as the Rice Granary of Batangas. Different rice products were suggested and discussed lengthily until the committee decided on sinukmani as the best rice product for Rosario to feature in a festival.

During the First Sinukmani Festival, a long table of this sweet delicacy was laid out to be shared among local residents. Because of its success, for this, its second year, a bigger celebration was planned, with the very first Pinakamalikhaing Sinukmani Contest along with a Street & Plaza Dancing Competition participated in by local high school students. These activities were also carried over in the 2007 Sinukmani Festival, which has been exclusively given media coverage by GMA7’s early morning program, Unang Hirit.

Through this annual activity, the municipality hopes to etch a niche for itself among the many emerging festivals throughout the country today.

The basic ingredients of the sinukmani are products which Rosario is well known for: rice, coconut and sugarcane. The ingredients are: 1 salop of malagkit, 1 ½ kilos of sugar and 2 kilos of gata or coconut milk.
Cooking sinukmani involves the following procedure: First, cook the malagkit rice then set aside. Next, cook the sugar and coconut milk together, while constantly stirring until the mixture achieves a smooth, sticky consistency. Add the cooked malagkit and mix well. Transfer the mixture to a bilao lined with banana leaves and top with caramelized latik. Let cool and the sinukmani is ready to be served.

THE PENITENSYAHAN FESTIVAL
During Good Friday, Penitensyahan (another festival celebrated by Rosario) is one of the traditions of the Rosarians to join the procession with the higantes or giant mock ups, the big crucifix, and the big rosary carried by the namamanatas. The procession usually starts at 5:30 in the morning, the route is Eastward to Poblacion A, then Barangay San Roque, Namunga, Namuco, passing in front of the Public Market then back to the Grotto Site.

Different Barangays and business establishents participates and bring their mock ups. Afterwards, they bring them back and store in safe place so it can be used and carried again for the next Penitensyahan.

About 400 meters away from the GRotto is Our Lady of the Most Holy Rosary Parish, where you can pray and meditate. While walking from the Grotto, you can pass by the different sidewalk vendors of religious souvenir items and food delicacies such as sinukmani, panutsa, sagimis, banana cue, kalamay, suman and fruits in season.

Sinukmani Festival is a prestige and popular festival in the town of Rosario, Batangas that commenced last 2005. It is celebrated every 9th of June. The highlight of this activity is the Longest and Most Creative Sinukmani for the year. The Sinukmani Festival is participated by all barangays, non-government organizations and all departments of the Local Government Unit.

JR Cantos is the Publisher of WOWBatangas.com. Some of the articles here on the website have been contributed over the years, so please just email us at help (at) wowbatangas.com if you have any concerns. Salamat!
@wowbatangas
Previous Finalists of My Hometown’s Finest Photo Contest (Plus Final Round Mechanics)
Next X-Men First Class, Now Showing at SM City Lipa