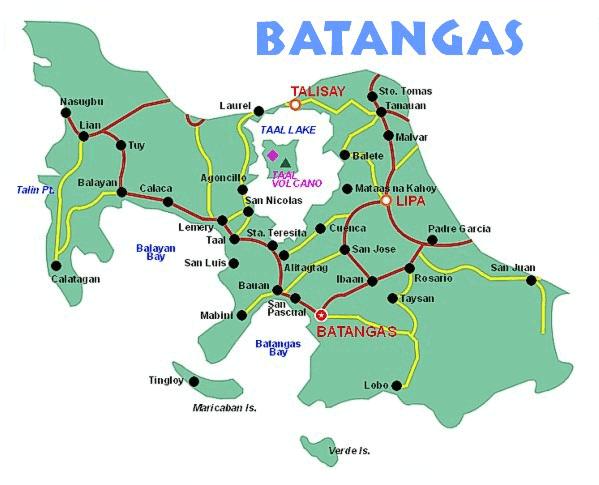 Long before the Spaniards came, large centers of population already thrived in Batangas. Native settlements lined the “Pansipit river”, a major water way. Mr. Robert C. Fox, an American archeologist, revealed that based on archeological findings particularly in Calatagan Peninsula, the province has been trading with the Chinese since Yuan Dynasty until first phase of Ming Dynasty in the 13th to 15th century. Inhabitants of the province were also trading with Japan and India. Historians believed that the present Batangueños were descendants of the Bornean Datus, Datu Dumangsit and Datu Balensusa who sailed from Borneo to Panay Island as far as Taal Lake.

Batangas was founded in 1581. Originally, Batangas was composed of the present province of Batangas, Mindoro, Marinduque, Southeast of Laguna and even as far as Camarines. The province was called Bonbon and later renamed as Balayan, the first capital of the province. Twice the capital has been moved in 1732; the capital was transferred to taal in 1752, then moved from Taal to Batangas were it has remained to date.

The named “Batangas” was derived from the word “ Batang “ which the natives called the numerous logs found in the Calumpang river, the body of water that runs through the Northeastern portion of the town and assumes the shape of a Tuning Fork.

Batangas was one of the first eight Philippine provinces to revolt against Spain and also one of the provinces placed under Martial Law by Spanish Governor General Ramon Blanco on August 30, 1896.

The province of Batangas is known as the “Cradle of heroes and Nationalists”. This is supported by the fact that several revolutionary Leaders came from the different towns of the province and half contributed much to the Philippine Libertarian Movement during the latter half of 19th century. Among these Nationalists are Miguel Malavar, Felipe Agoncillo, Marcella M. Agoncillo, General Nicolas Lantin Gonzales, Apolinario Mabini and the Families of the Laurels, Rectos, and Levistes.

Batangas is Proud of its Historico- Cultural heritage and the most significant of them are the Talaga Mabini Shrine, the site of the replica of Mabin’s house and the mausoleum which keeps the publication of and about the hero. The Spanish – Filipino heritage among Batangueños is the Best Reflected in the vicinities of Taal. The town is not only famous in Historical Leaders but also in Historic sites and Structures, depicting centuries of Hispano-Filipino civilization as well as American and post American periods.

JR Cantos is the Publisher of WOWBatangas.com. Some of the articles here on the website have been contributed over the years, so please just email us at help (at) wowbatangas.com if you have any concerns. Salamat!
@wowbatangas
Previous Experience the serenity – La Frondosa beach
Next San Jose, Batangas History