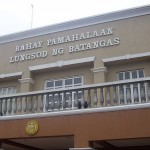 The Batangas City Planning and Development Office tied up once again with UP Planades, University of the Philippines’ development planning experts, in the city’s ten-year Comprehensive Development Plan, Land Use Plan and Zoning Ordinance for Calendar Years 2009-2018. This development plan covers further benefits in education, health, housing program, population control, and economic advancement in Batangas City for the next ten years.

Based on a study, Batangas City has the capability to fund the projects to be implemented for the next ten years reaching the amount of P2.2 billion. According to consultant Dr. David Yap, the team identified eight growth centers in the revised Land Use Plan. Three of these are the Montemaria Shrine in Barangay Pagkilatan, which is expected to put Batangas City in the world map as a pilgrimage site and another tourist attraction; Barangay Sampaga which is designated to be an educational center; and the diversion road where light industries are supposed to flourish.

Dr. Cresencio Montalbo, Jr., UP Planades team leader, stated that the southern portion of Batangas City is catching up with the development which was only concentrated on the northern part of the city in the previous years. He said it was because of SM City Batangas, a development catalyst which draws investors to the vicinity.

The consultants also projected that the leading investments for the next years will be the agro-industrial, tourism, real estate, power, and fuel industries.

JR Cantos is the Publisher of WOWBatangas.com. Some of the articles here on the website have been contributed over the years, so please just email us at help (at) wowbatangas.com if you have any concerns. Salamat!
@wowbatangas
Previous San Jose Sico Inmates’ products now on market
Next SM City Lipa Movie Schedule, September 16-22, 2009