The Festival That Makes Loming Batangas a Star

It was Summer Hills’ 5th lomi festival. The organizers were happily preparing the venue when we arrived. They were putting decorations, preparing booths, prizes and sets of table. The event formally started with a mass. Afterwards the host introduced the judges for the competition. There are two categories for that contest: they have the amateur and the professional level. The amateur level has four contestants and the professional level has three contestants. They came from different places in Lipa.

The event finally started at around 2 pm in the afternoon, the contestants were cooking lomi. They have different styles and ways in cooking it. Mrs. Rosario Atienza, from the amateur level, shared her toppings, “eto yung mga toppings ko sa lomi, atay, chicharon, porkchop, itlog ng pugo,” she said. The other contestants did not share it. 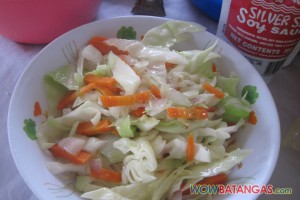 While they were cooking, there were games for the audience. They included bingo and games for children. Every thirty minutes they were having raffles, giving away of prizes and souvenirs to the audience and visitors. The event was not boring, they have food booths (stalls) featuring drinks, halo-halo, barbecue, kakanin, pancit, etc.

Contestants were done cooking after an hour and the judges started tasting the lomi. The judges, some of them are chefs, some are government employees, plus our very own Miss Gerlie Katimbang. While the judging was on going, the contestants were giving free lomi to the audience, which was part of the criteria for judging — mass appeal.

The part of the event that all of us had been waiting for was the announcement of the Lomi Festival’s winner. From the amateur level, Dan Iglesia, a food server in an eatery in Lipa, was declared as winner. He received P3,000, a microwave, and Silver Swan gift packs. It was Iglesia’s first time to join such contest. “Masaya ako at nanalo ako,” he said. From the professional category, Marites Baleguer was the winner, she received P5,000, one microwave oven, and Silver Swan gift packs. After giving the prizes, the raffle draw games continued.

This event was very entertaining. From the main part of the event, the ice breakers, the venue, it was all good. In fact, I am one of the winners from the audience, I went home with a desk fan, I didn’t expect it really. I enjoyed this happening actually. I hope I can attend an event like this again, where everyone’s enjoying and enthusiastically participating.

JR Cantos is the Publisher of WOWBatangas.com. Some of the articles here on the website have been contributed over the years, so please just email us at help (at) wowbatangas.com if you have any concerns. Salamat!
@wowbatangas
Previous Experiencing Taal’s EL PASUBAT FESTIVAL
Next Robinsons Place Lipa Goes Back-to-School Sale with 70% Discount on Selected Items