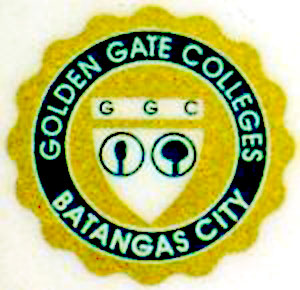 Conceived and brought to reality by a farsighted and enterprising educator, Maj Ricardo B Bonilla,the Golden Gate Coll is the first higher institution of learning est. in the then Batangas town.With the help of his ever sacrificing wife,Dr. Marcela R Bonilla,and Prof Fausto F Catoy,the 1st collegiate class was started in Nov 1946 with 17 students in attendance.

The high integrity of the founder of the college,the strong faculty members, the ever-expanding library facilities, and the progressive liberal policies of the President drew students in great numbers not only from the province of Batangas,but also from the provinces of Laguna, Quezon, Cavite, Or and Occ Mindoro and as far south as Romblon, Masbate and Marinduque.

The SY 1947-48 saw a big increase in the student population,such that during that year, 300 college and 150 high school students registered. Since then enrollment continued to rise.
Originally housed in the old Canent bldg on P.Pelaez St(now site of a 3-story Eng’g bldg)and the house formerly occupied by the Batangas City Mayor,on Rizal Ave,the admin later on constructed a 2-storey bldg on leased lot of former Gov. of Batangas, Hon. Vicente J. Caedo on Rizal Ave in order to accommodate the ever-growing school population.

The Admin continued to be plagued by the problem of accommodation so much so that Atty Vicente J Caedo,EVP,Mrs Zoila L Mendoza,registrar and Ms Belen U Castillo,cashier, who were then virtually running the school and determining its policies with the blessing of Pres Bonilla, began looking for bigger sites in 1962.They found one along P.Prieto St and two lots along P.Pelaez St., negotiated its purchase, and 2 yrs later the whole institution moved to its present locations.
Prodded by its desire to help solve the medical needs of the community, the Admin established Our Lady of Grace General Hospital, now Golden Gate General Hospital) in Nov 1970 the first private hospital in town.The foll month, it was inaugurated with no less than the Director of the Bureau of Hospitals as well as prominent local medical practitioners in attendance.

Simultaneously with the establishment of a hospital, a course in midwifery was opened followed by the first year course in nursing in 1971.And by the years ‘74 and ‘75 both courses were recognized 1st and 2nd year of Midwifery and 1st to 4th year of Nursing,respectively.

Due to the clamor of qualified public and private school teachers to upgrade their educational qualification, this college in 1961 was inspired to offer Graduate Studies leading to Master of Arts in Education and Master of Arts in English to which were added later Master in Business Administration and Master in Public Administration both with or without thesis.These offerings were made for the purpose of giving advanced instruction and professional training in various occupations,since it aims to develop the habits of scientific inquiry and original thinking,and inquiring attitude,and an investigating spirit.

To cope with the increasing demand for skilled workers here and abroad the Administration offered the Bachelor degree courses in Civil, Mechanical, Electrical and Chemical Engineering in 1978.The college invested several million pesos worth of equipment to satisfy the requirements for the said courses and is still in the process of acquiring more to fully comply. The GGC graduates,worthy licensed engineers could be found in refineries, building constructions and as head of offices.

With the desire of the Admin to improve its offerings and to give the students the opportunity to finish short courses,it offered Diploma in Industrial Technology Major in Mechanical and Chemical Technology, Two Year Course on Pharmacy Aide, Nursing Aide, Avionics Technician, Aircraft Maintenance, Computer Secretarial and one year Integrated/ Computer Course. In 1996 Master of Arts in Nursing was offered the Six Months Caregiver Course approved by TESDA was also offered in 2003.

A member of the Philippine Association of Colleges and Universities (PACU), the GGC maintains a continuous program of Faculty improvement and Scholarships to deserving students. Since it was the first school to open courses in teacher training, it has become the Alma Mater of the greater bulk of prominent educators and promising teachers in the city and provincial school division.

Bigger things are in store for this college. The Admin has planned continuing programs to realize the dream of its founder the late Major Ricardo B. Bonilla. i.e. “Golden Gate Colleges Quality Education Towards Excellence and Progress.”

JR Cantos is the Publisher of WOWBatangas.com. Some of the articles here on the website have been contributed over the years, so please just email us at help (at) wowbatangas.com if you have any concerns. Salamat!
@wowbatangas
Previous Stonyhurst-Southville International School
Next Shine Penelope Shine…