In the recent months, we’ve seen photos all over the web of people who do the planking. Call it a fad, call it a trip, but planking had been existing since I don’t know when.

It was because of the student protesters who joined last Monday’s transport strike. What these students did? They planked on the streets of España.

Okay, Cong. Castelo only wants to protect students, young people, and plankers of any age, from the dangers of this fad. Imagine how risky it was to plank on the streets. Ang lalaki ng mga buses na pwedeng dumaan doon na hindi nila namamalayan. 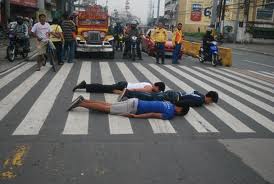 Not sure if the Anti-Planking Act only prohibits people to do planking on street rallies. That is why people who do planking, those who embrace this fad, find it hard to decipher why on earth planking might soon be against the law. Geez.

Planking on risky places such as lofty railings, edge of a platform, in the middle of the street, on railways, causes hysteria on people who are against the fad. Safety first, right?

But for people who consider planking a plain fun activity, passing a law against it is too much.

I came across Juanrepublic’s Tumblr post yesterday which talked about the Anti-Planking Act and I can’t help but laugh on his next post. Will an Anti-Jump Shot Act be filed any time soon? Haha. Oh no, I can’t imagine how many people would protest if it happens.

At the end of the day, whether this Anti-Planking Act would be junked or not, WE ALL WANT safety in everything we do. But seriously, it would be better if our lawmakers would delve on the much more important issues and come up with more sensible corresponding acts to pass.

JR Cantos is the Publisher of WOWBatangas.com. Some of the articles here on the website have been contributed over the years, so please just email us at help (at) wowbatangas.com if you have any concerns. Salamat!
@wowbatangas
Previous Death of Philippine Showbiz Icons: Actors and Musicians Who Have Gone Too Soon
Next Be a WOWBatangas Agent